The Art of Chemistry 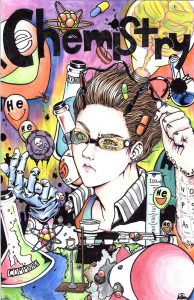 In many respects, synthesis is the heart of chemistry. The creativity involved in combining the elements of the periodic table into unprecedented molecules and materials distinguishes chemists from other scientists. But wielding the chemical paintbrush in a controlled manner is a challenge.

Consider the synthesis of natural products. In assembling a complex organic molecule such as an antiviral or anticancer agent, the synthetic chemist must plan and execute multiple reactions, typically in a stepwise manner, until the desired compound is obtained. Success often requires the ability to react a single part of a molecule to the exclusion of others. Such ‘chemoselectivity’ is typically achieved with a protecting group that can later be removed without destroying any of the product. The labour-intensity of this process is analogous to being dressed in medieval armour and having to wash with a fire hose, cleaning the face by raising the visor, the hands by removing the gauntlets, and so on.

A key goal in synthetic organic chemistry is the design of reagents to achieve chemical transformations at specific sites in a molecule without protection and deprotection steps. To achieve one stereoisomer to the exclusion of its mirror image is a further, often more difficult, challenge, as is the development of catalysts that promote an efficient chemical transformation.

The synthetic inorganic chemist faces a different but equally formidable task of control. Consider the goal of preparing a catalyst for a chemical transformation that occurs in living organisms at ambient temperature and pressure, such  as the conversion of Chemical revolution: (from inside) the open-shell Keggin ion, ferric wheel and molecular 18-wheeler. NATURE|VOL 416|11 APRIL 2002|www.nature.com Chemical synthesis Success in the synthesis of natural products often requires the ability to react a single part of a molecule to the exclusion of others. atmospheric nitrogen to ammonia, natural gas to methanol, or water to hydrogen. The first of these catalysts would significantly assist in the fertilizion of crops; the second would allow methane to be transported much more economically from remote gas wells to urban areas; and the third would provide a key ingredient for fuel cells from a non-carbon, replenishable fuel source.

The enzymes that catalyse such reactions in nature typically operate at kilohertz frequencies: many biological chemical reactions convert substrates to  products at rates of roughly 1,000 per second. Almost half of these enzymes require metal ions to achieve their catalytic functions — usually Mg, Ca, Mn, Fe, Co, Ni, Cu and Zn — typically embedded in a three-dimensional protein matrix that ensures tightly controlled alignment of the reactants to achieve the desired formation and release of the product molecule(s). Outside the protein milieu, these metals in their typical  2 and  3 oxidation states form complexes that exchange their ligands rapidly — they are kinetically labile.

These ions seem, therefore, to have been adopted by living organisms precisely because they can bind to substrates and release products on a timescale commensurate with biological requirements. Notably absent from the list are second- and third-row transition metals, such as Ru, Pd and Pt. Complexes containing these metal ions are important as industrial catalysts, but their rates of ligand exchange are much lower than those of their first-row counterparts. With a few exceptions, such  as Mo  and W,  such  elements have  therefore not been selected for biological functions.

A great challenge for the synthetic inorganic chemist who is attempting to mimic an enzymatic transformation is to create an environment that stabilizes the ligand composition at the metal ion, while offering labile sites for catalysis. In  a biological molecule, ligands are typically supplied by amino-acid side chains and are therefore held in relatively fixed positions. Disassembly or rearrangement to thermodynamically more stable entities is kinetically prohibited by energy  supplied by  the folding of the protein into its specific three-dimensional shape. In creating a functional synthetic analogue of the protein’s active site, however, the chemist is faced with the daunting task of overcoming the tendency of the desired target molecule to rearrange or react with components of the solution to form a thermodynamically stable, undesired side product with no functional capability. The system is thus under thermodynamic rather than kinetic control, because of the labile nature of the metal ions involved.

Yet in organic chemistry, one more frequently has kinetic control of the molecule. For example, in preparing a catalyst with a phenyl (C6H5) ring as the framework on which a reactive moiety is appended, the organic chemist does not have to worry about undesired transformations involving the spontaneous cleavage of C–C and C–H bonds in the phenyl unit, because these bonds are kinetically stable. The use of designed peptides is one approach to the problem of creating new molecules as ligands for transition-metal ions that provide parallel kinetic stability for inorganic catalysts but allow for functional sites.

On occasion, the inability to control a desired chemical transformation gives rise to new molecules that can be objects of aesthetic beauty as well as potential usefulness. One example is the serendipitous synthesis of carboxylate-bridged polyiron compounds (see figure), including the ‘molecular ferric wheel’, the ‘molecular 18-wheeler’ and an open-shell Keggin ion. I have not seriously pursued the rational design of such molecules because I do not understand the principles of control involved. In cases in which many interactions are possible, particularly many non-covalent, subtle interactions working in concert, the chemical paintbrush can seem to have a mind of its own. It is often impossible to predict the factors that will dominate and dictate the nature of the product.

With the use of kinetically more inert transition-metal ions in conjunction with bridging ligands, however, it is possible to assemble molecular squares, cubes and other polygons and polyhedra, as well as porous solids with potential for a range of applications. Possible examples include new materials for cleaning waste water, smart detectors for chemical and biological warfare agents, and components for molecular electronics devices.